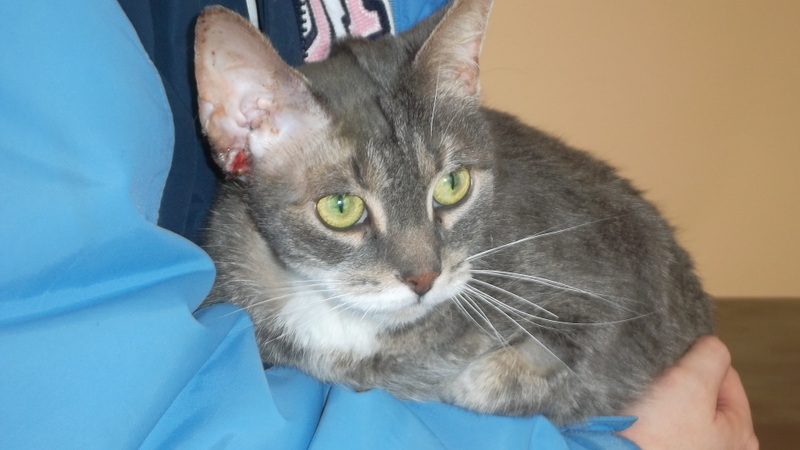 As our “contribution” to Random Acts of Kindness week, three of us got together to help one of our long-time clients deal with a serious ear problem in her cat that would involve a very difficult and time-consuming surgery. Dr. Gilbert Brodeur donated his surgical time and expertise, Dr. Fiona Gilchrist offered hers as well and I donated the surgery costs, staff, space…

In the end we helped some very special clients to save their adopted cat and give her a new lease on life that will hopefully be pain-free and long and happy. This is her story in her “Mom’s” words…

I lost my Cassie unexpectedly back in April. I’d brought her in after noticing that she had eaten a thread – the thread came out no problem, but it was discovered that she had congestive heart failure. She passed away three days later.

I gave it four months, but just could not adjust to having only one cat so I began checking out the websites for the local humane societies. I was going through all the cats at the Loyalist Humane Society and one caught my eye – “Bella”. I had to have her. I showed my husband her picture but only as a formality… I told him I was going to get her with or without his approval!

Anne (the manager at the LHS) was so pleased that someone was showing an interest in Bella as no one had ever enquired about her before – she ran away every time someone came into the shelter so she didn’t stand a chance of being adopted. She warned me that she was very timid and likely wouldn’t be the best match, but if I was willing to be patient it was well worth trying.

Bella had arrived at the shelter as a kitten 4 years earlier – infested with fleas and covered in sores due to a flea allergy. She had almost no fur and had to be wrapped in a towel just to be held.

It took several attempts just to catch her (the cats run loose in various rooms at the LHS). I was shown 200 + other cats and held many adorable kittens but it had to be Bella. I was assured many times that Anne would welcome her back if it didn’t work out. I pulled out my wallet to pay for her and Anne told me she couldn’t take any money for her… “you have a huge challenge on your hands with this one!”. She fully expected me to bring Bella back.

Since she wouldn’t take any money for her I made a donation to the LHS and brought her home. For the first week we barely saw her. She spent her days alternating between hiding underneath the bed and the closet, but with a lot of patience and coaxing she eventually came out and adjusted… too well. This shy, sweet, timid cat was nicknamed “Bully Cat” as she began to terrorize our other cat Ripple. It went far beyond the normal not getting along – cat fights involved chunks of fur and puddles of urine on the floor once they were able to be pulled apart. Personally I think she was just so happy to be loved for the first time in her life that she was jealous and didn’t want to share the attention she was getting with anyone else.

We have been through a lot with her in the seven months we’ve had her – continuous ear infections, stalking and terrorizing poor Ripple to the point Dr. Gilchrist put her on a medication in one last attempt to prevent us having to take her back to the LHS (as much as we had grown to love her, Ripple was terrified to come out from under the hot water tank and it wasn’t fair to expect her to live her life in fear), a reaction to the medication (thankfully the two cats now get along for the most part), possible ringworm (turned out to be negative) and just the patience and love required to give her a life where she isn’t afraid of everyone. It seemed so unfair that after four years of living in a shelter, she finally found a home where she is loved and nature decided to take that from her.

We can’t thank you enough for giving this sweet little girl a chance at a happy life. We persisted through all of the hurdles we faced with her only to be told we may lose her anyway. If it wasn’t for your generosity and compassion, we probably would have had to say goodbye to a third family member in less than a year. Although we know that there are no guarantees, we also know that you’ve done everything possible for her.

Thank you all so much!