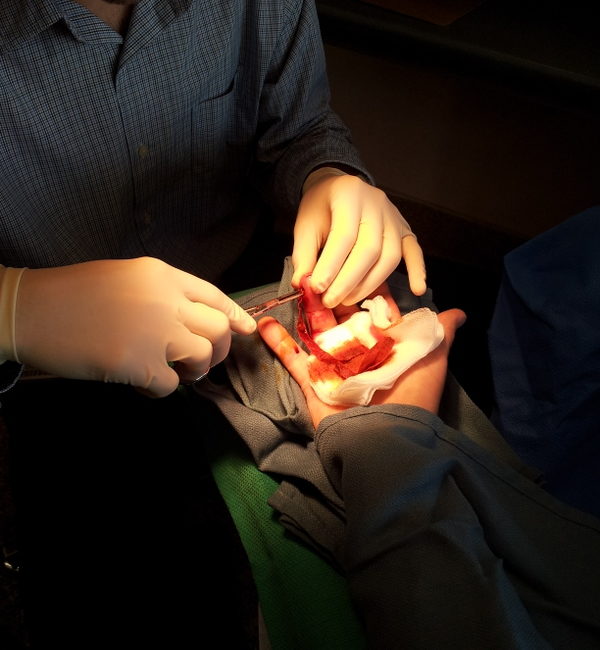 A cat bite nearly sidelined my boss from the surgical suite for good.

Now that his finger has escaped amputation and Dr. Steen is back in full form, it’s time to hold him up as an example of how not to treat a cat bite.

If a cat’s teeth break through your skin, immediately wash the area with antiseptic and flush thoroughly with water. That word immediately was indeed used to impart a sense of urgency. When you wait too long to clean the wound, infection is more likely to set in, potentially causing your finger to swell to the size of a banana.

Cats’ teeth harbour particularly nasty bacteria whose names are hard to spell and more difficult to pronounce. Suffice to say, cat bites often need to be treated with antibiotics – often enough that it’s wise to see a physician anytime kitty uses a part of your anatomy as a chew toy.

Since our Dr. Steen apparently took the time to finish whatever work he was doing before cleaning his wound and failed to see his doctor in a timely manner, he had to undergo surgery followed by weeks of painful treatments. All that while, we were worrying he might lose at least part of his finger, making it difficult for him to perform surgeries himself. 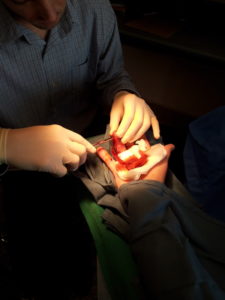 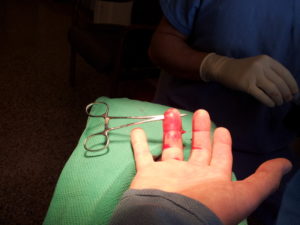 Fortunately, being a health-card-carrying resident of Ontario, he didn’t have the additional pain of parting with tens of thousands of dollars to pay for treatment. Just last month, David Lazarus, a journalist in Los Angeles was billed $52,000 for treatment to save his hand from a cat bite. Luckily, Lazarus had health insurance that covered the majority of the cost and, even more fortunately, he still has his hand. For the moment, he also still has his cat.

None of this is meant to downplay the potential for infection, including rabies, from bites by any species of animal. A Texas woman has just lost her legs and fingers to a rare infection from a dog bite.

The best approach in any bite incident is immediate disinfection of the wound and a visit to the doctor. All animal bites in this area should be reported to a local branch of the Hastings and Prince Edward Counties Health Unit.