Have you ever noticed how many different styles there are for dogs’ ears?  We laughed about it the other day when Hillcrest technici 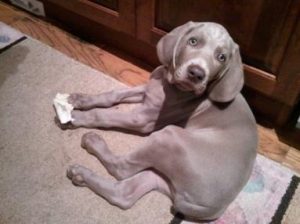 an Melissa brought in Jackson, her new weimaraner puppy. Wow, those are big ears (on Jackson that is, sorry Mel).

I used to think basset hounds had the longest ears, but that honour actually belongs to bloodhounds. In fact, a hound named Tigger (go figure) holds the Guinness World Record title for Longest Ears on a Dog — GWR.com Tigger . His pendulous pinnae measure at about 13.5 inches (34.5 cm). Jackson, you’ve got some growing to do.

All you labrador, golden retriever, cocker spaniel owners out there are probably shuddering at the prospect of keeping such monstrous appendages clean. Most dogs with long, heavy ears are prone to ear infections. “Otitis externa” or inflammation of the outer ear is a common condition, usually involving a yeast infection although bacteria can be in there too, particularly in cocker spaniels. It can be started by allergies to food, pollens, dust, or just about anything including the cat. Poor cats, they get blamed for everything, but they probably don’t notice.

Ear care is an important part of keeping any dog healthy. Neglect can lead to inner ear infections, causing severe dizziness and nausea. Also, the constant head-shaking and scratching associated with simple external infections can break blood vessels in the ear flap, leading to a painful condition called a “hematoma”, which literally means “bruise”. Any bruise is caused by bleeding under the skin, but in ears, there’s no muscle for the blood to seep into, so it creates a big sac of fluid. The ear becomes swollen, painful and heavy with blood. Here’s a link for more information: Aural hematoma info .

So what’s involved in ear maintenance? Regular inspection goes a long way. I used to advise clients to look at and sniff their dogs’ ears on a weekly basis, checking for the sour smell of infection. Then, at a recent dermatology lecture I was startled awake to hear that it’s not a good idea to sniff ears. Apparently, we can inhale the infectious bacteria or yeast into our sinuses. So just look for redness, any kind of discharge and matted hair blocking the opening.

After swimming or whenever they look dirty, dogs should have their ears rinsed out with clean water, diluted white vinegar (save the balsamic for the salad) or prescription ear cleaners. Dogs have much longer ear canals than people and to clean properly, it’s important to entirely fill the ear with fluid until it almost overflows, then massage gently around the ear base. Ask your veterinarian or a vet tech to demonstrate for you, then pick an easily cleaned location like the shower stall because there’s a lot of vigorous head shaking to follow. Outdoors is a good choice at the right time of year.

Things not to put in the ear unless instructed by your vet: hydrogen peroxide, rubbing alcohol, cotton swabs (beyond where you can see), mineral oil or tea tree oil.

If there are signs of infection such as redness, discharge, pain, head-shaking, scratching or odour (hey, I told you not to sniff), have your dog examined by a veterinarian. These conditions rarely resolve without medication and delay in treatment can lead to complications as discussed above.

Just as an afterthought, dogs rarely get ear mites. I’ve seen exactly two cases in dogs in 15 years of practice. It’s mainly a cat disease and the dogs I’ve seen with mites lived with friendly felines who liked to rub and share. Poor cats…get blamed for everything!

Keep an ear out for more Fuzzy Logic about your pets.

What you need to know about kitten vaccinations

Kittens will get vaccinations at 8 weeks, 12 weeks and 16 weeks, then annually. Overview A vaccine is a substance created to incite an immune response for a particular disease.  It needs to be given multiple times to a kitten to initiate his immune system.

With recent changes to restrictions on businesses, we are pleased to advise that effective May 19, 2020 the restrictions on veterinary practices have been lifted. Based on these changes, below are some important updates to our operating policies.

1. WE CAN NOW SEE ALL CASES BY APPOINTMENT ONLY

2. SAFETY MEASURES TO KEEP EVERYONE SAFE

We are OPEN with the following hours:

Have you welcomed a new furry family member to your home? We’d love to meet them! Visit our Must Know New Pet Owner Information page for useful resources and helpful recommendations for new pet owners.

Thank you for your patience and understanding and we look forward to seeing you and your furry family members again!