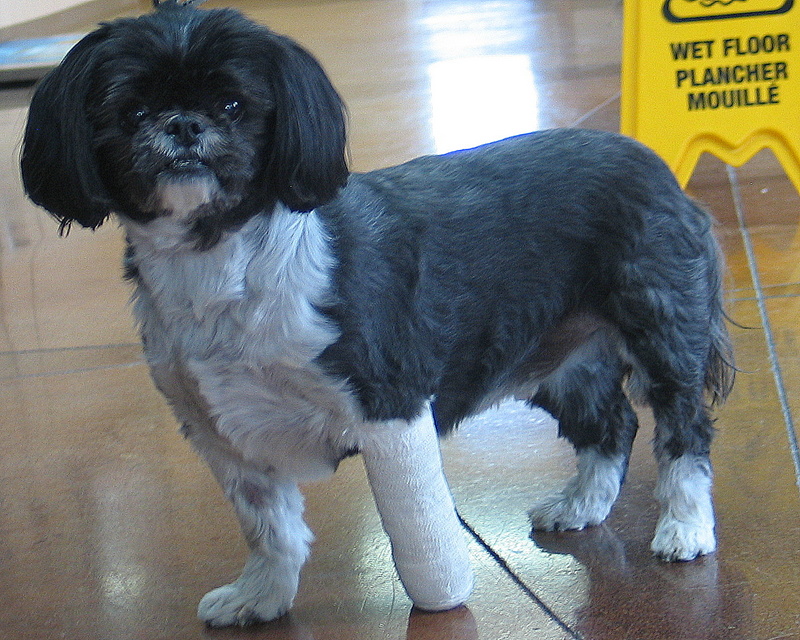 Just jumping into bed can lay you up for months…

It’s not every day that your dog sprains his wrist. It was even a first for me when it happened to a patient last week and it is surprising to see what a serious injury this can be.

At about 10-years-old, Gizmo is well-settled in his role of beloved lap dog. Watched like a hawk by his “Mum”, there’s no chance this little guy would ever get hit by a car or attacked by a wild animal. Nobody could have predicted he’d hurt himself so badly jumping onto the bed. Yet there he was, hobbling three-legged in my exam room with his left front foot pointing in the wrong direction.

After an initial assessment raised suspicions of a torn ligament, we wrestled Gizmo away from Mum and took x-rays to see what was going on inside. No broken bones were found, but one of the ligaments holding things in place had ripped off of its anchor. Broken bones might actually have been better.

People who have had serious soft tissue injuries probably know this first hand – bones heal better than ligaments and tendons. Severe, “third-degree” sprains involving tearing of the ligaments usually require surgery or immobilization and they may never be as strong afterwards.

Still talking about humans here, immobilization is generally achieved with some sort of splint or cast and weeks or months of rest; annoying, uncomfortable, but possible. Talking about Gizmoes, well, that’s a different kettle of fish. Dogs do not respect casts and, if comfortable enough, they expect to continue about their business as if one of their limbs was not completely encased in a bandage. 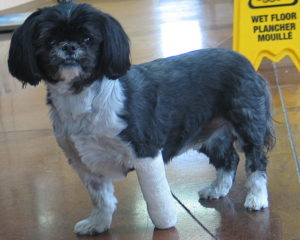 True to form, his first night in a splint Gizmo was tackling stairs with all four legs and trying to fly off the couch. The stairs are now blocked. I’m not sure what can be done about the couch and anyone who has heard Gizmo howl knows cage-confinement for eight weeks is not practical.
The options for our too-busy patient were two different approaches to surgical repair. In one scenario, the torn ligament is replaced by a synthetic implant, hopefully providing for full mobility of the joint afterwards. Alternatively, the bones can be fused together, providing stability, but no movement.

The equivalent of our wrist, the carpal joint in dogs isn’t used a lot other than for weight-bearing. Whereas we need to move our hands in many different directions in the performance of tasks such as typing newspaper columns and applying splints, dogs bend them largely in one plane. If the bones are fused, the elbow and shoulder joints just have to flex more to allow walking and running activities. Except in busy working and sporting dogs, this is not a big concern.

The prognosis for healing a ligament tear with a splint is not great. So, if Gizmo does not have a more stable joint by Christmas, we may need to have it fused. In the meantime, he’ll have several bandage changes to let us check for underlying pressure sores and retighten the wraps, along with several lectures about not jumping, running or otherwise abusing his poor leg.

I suspect all of this will be tougher on Mum and Dad than on Gizmo.