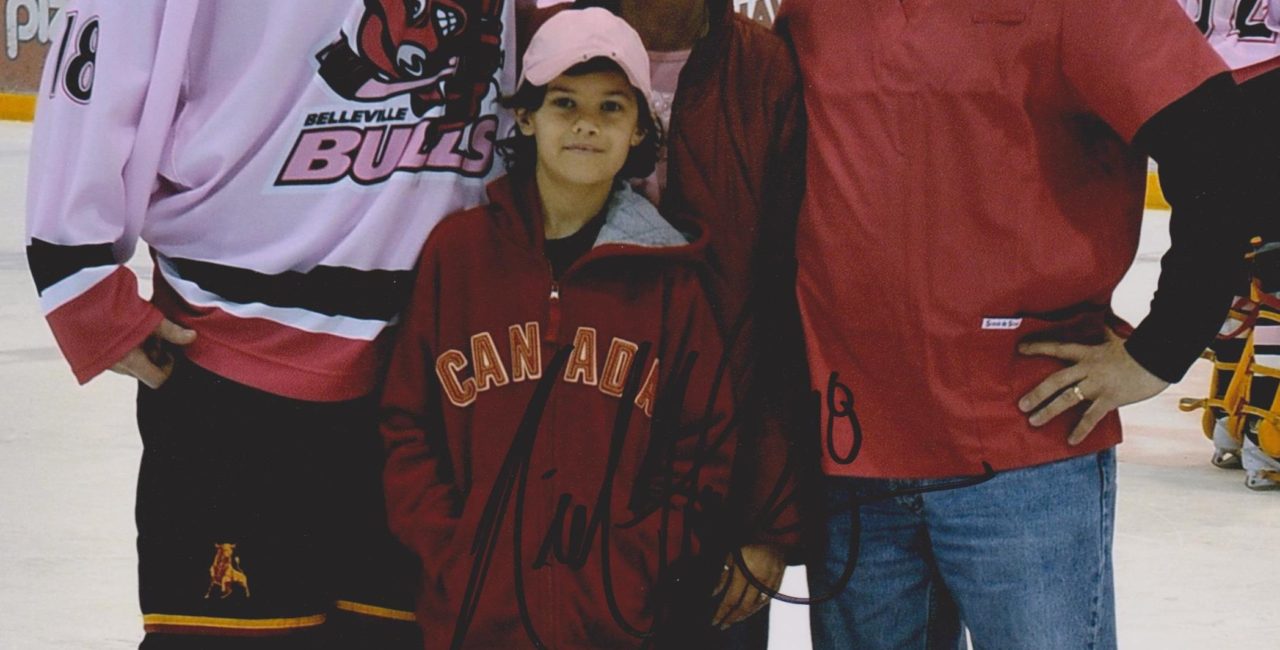 We are firm believers in the power and necessity of community support here at Hillcrest Animal Hospital. We have a long tradition of supporting local recreational children’s sports teams as well as a number of higher profile local charities (see our “cyclone” on the lower right corner of our homepage).

This year we again purchased game-worn jerseys from the Belleville Bulls Charity Auction. For 3 of the last 4 years the Bulls have played a regular league game wearing jerseys that are specifically designed to support a local charity. During the game a number of activities serve to raise money for the charity. At the end of the game the jerseys that are worn by the players are sold to the highest bidder during a live auction. All of the funds raised go to the charity. This was our third year of buying these jerseys. Three years ago we bought Nick Palmieri’s jersey during the “Pink In The Rink” event in support of Breast Cancer Research.

Two years ago we bought Steven Silas’ jersey in support of the Military Family Resource Center, as well as Andy Bathgate’s.

This year we also purchased 2 jerseys; Scott Simmonds and Daniil Zharkov. Together they were actually quite a bit cheaper than the one 2 years ago when Dr. Steen got a bit carried away bidding on Steven’s jersey. But that is another story…

This year’s auction was in support of Quinte Health Care to raise money to purchase a Holmium Laser for the Belleville General Hospital. This laser is used in the treatment of kidney stones in humans (bet it would work in dogs too!) and will benefit all people in the area who suffer with this very painful condition. In the end the Bulls and their generous fans managed to raise almost $30,000 towards the purchase of the laser! This was all through the untiring efforts of the wonderful folks at The Belleville General Hospital Foundation.

It is a special feeling to know that you have contributed to such wonderful local causes. We would like to applaud the Bulls organization, all of the players, and all of our fellow fans for their continued generosity. For those curious to see the sweaters, we have them on display in our waiting room, although this year’s will not be up for a couple of weeks.