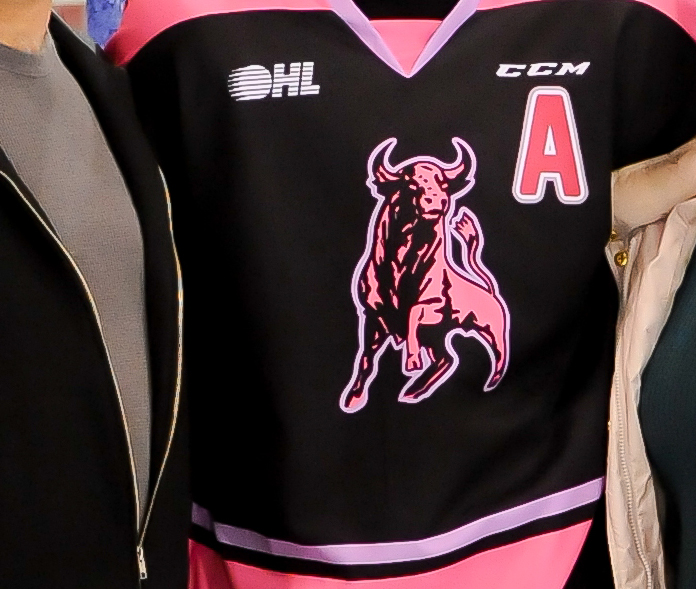 Pink In The Rink Deux!

They have done it again!

On Saturday evening the Bulls played the Saginaw Spirit and wore new specially-made jerseys which were auctioned off to the highest bidder after the game. This was all in an effort to raise money for the Belleville General Hospital Foundation to support cancer treatment at BGH. The Bulls original jersey auction evening was entitled “Pink In The Rink” to raise money for Breast Cancer Research in 2009. As the focus was again on cancer we saw the return of “Pink In The Rink” this year. Funny thing is that the original “Pink In The Rink” in 2009 was also against the Saginaw Spirit!

This year we picked up two jerseys at the auction; Adam Bignell and Charlie Graham. Adam has been a defensive stalwart for Belleville for almost 5 full seasons. This year he started his schooling at university and was asked to return to the Bulls to bring some experience to their defense. He graciously returned to the team and has had a great year so far. As a matter of fact on Saturday night he played in his 255th OHL game and he scored his very first OHL goal! Charlie Graham has tended the area between the pipes for Belleville for almost as long and has also had a great year. Charlie is also very fond of animals, forming a special bond with a Fixed Fur Life dog last year who actually has his same name. Both of these young men are personal favourites of myself and my wife for their dedication and amazing personalities.

The Bulls raised $61,000 for the BGHF, with $25,000 or so coming from the jersey auction alone. As always we were very proud to be a part of the effort this year. Once the jerseys get cleaned and one is framed everyone is welcome to come in and see it on our waiting room wall along with all of the others. Bulls fans will likely see myself or my wife wearing the other one at future Bulls games.