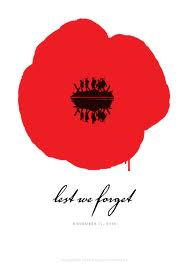 Hillcrest Animal Hospital will be closed on Tuesday, November 11 for Remembrance Day. As with most families in this country my family has had its share of members who served in the armed forces of both Canada and the United States. We have been blessed in that none of our family members have paid the ultimate price for their service. My grandfather served in both World Wars. My uncle Shawn served in the Canadian Air Force (here in Trenton for a few years as a matter of fact), and my uncle Frank served as a recon marine in the United States for 2 tours in Vietnam. My brother-in-law Laurie also served in the Canadian Navy for 20 years. I believe that every single one of us owes a tremendous debt to the people who bought our freedom and standard of living with their lives, and that we should all be prepared to put one day of the year aside to honour their sacrifices.

I am originally from “Down East” (Nova Scotia) where just about every small business closes for Remembrance Day. It isn’t actually a statutory holiday in Nova Scotia but very few/no small businesses remain open on that day. For the last 6 years Hillcrest Animal Hospital has been closed on November 11th and as long as I am at the helm of the hospital it will continue to be closed on that day. This year this seems particularly important due to the murders of Corporal Nathan Cirillo and Warrant Officer Patrice Vincent on our home soil.

On Tuesday another local veterinarian, Dr. Chiemi Ogawa of Presqu’ile Animal Hospital in Brighton will cover any of our client emergencies until the emergency hospital opens at 6 PM. They are located in the plaza at 46 Prince Edward Street in Brighton and can be reached at 613-475-5510.

Thank you for allowing us to do this and for honouring our fallen troops in your own way.

And thank you very much to all veterans and present members of the military from all of us here at Hillcrest Animal Hospital.

We will never forget!