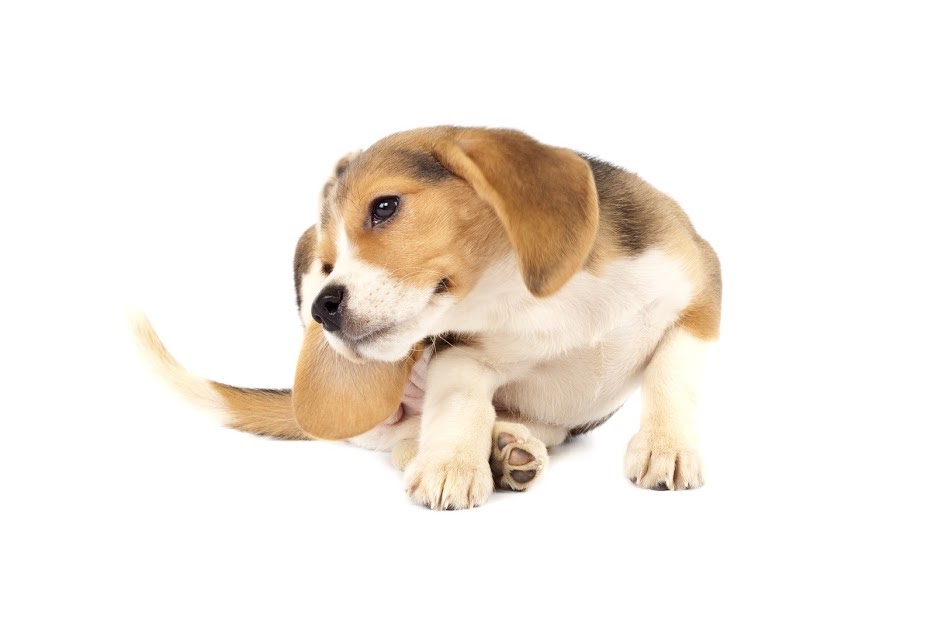 There are numerous parasites that rear their ugly heads every spring. These include; fleas, ticks, roundworms, tapeworms, hookworms and whipworms. The earliest “risers” seasonally are the ticks.

Ticks are referred to as “cold-weather parasites”. This is due to the fact that the seasons that they are most abundant in this climate are very early in the spring and very late in the fall. Basically as soon as the temperature is consistently above zero in the spring (even just a couple of degrees) the ticks are out in huge numbers. Ticks in this area are primarily parasites of the white-footed mouse and deer, making them very common in our Provincial Parks. Being a parasite of deer requires the ticks to be active at the two times of year when the deer are the most active; spring and fall. Dogs and people (and less often cats) are incidental hosts of ticks, most often picking them up from wooded areas and areas where there is tall “field grass”.

The tick will fall onto the dog, generally from the shoulder area forward, as they brush aside tall grass (dead or alive) or pass by trees in areas frequented by deer. The ticks will wander about on the dog until they find an area with a blood vessel near the surface of the skin where they will attach and begin to ingest blood. Dogs cannot feel the ticks bite as their saliva has a natural anaesthetic in it. It takes about 24 hours for a tick to fill her foregut, at which point she will regurgitate the semi-digested blood under the host’s skin (the source of the myth about ticks burrowing beneath the skin). She will then begin to feed in earnest and fill both her fore- and hindgut over the next 48 to 72 hours.

Once the tick is full she will fall off of the host, mature her eggs and lay thousands of them where she fell to ground. Most ticks will go through a larval phase, but once they are mature they will repeatedly climb objects in the area until they can get about two-and-a-half feet off the ground. There they attach with their hind legs, spreading their front legs into the air waiting for a host to pass by. Why two-and-a-half feet? Because that is the height of your average deer’s belly above the ground!

The greatest concern with the ticks in this area is Lyme Disease. Lyme Disease is caused by a bacteria called Borrelia burgdorferi. This bacteria can cause a spectrum of disease that ranges from absolutely no disease at all, to severe multiple joint arthritis, to multi-organ failure. To date the disease cannot be cured, but it can generally be arrested with appropriate antibiotic treatment. The problem is that the onset of the disease is generally not noticed until the symptoms become quite severe. Treatment at this point will usually arrest the course of disease, but cannot reverse any damage that has already been done.

In humans tick bites are often surrounded by a characteristic red rash when the bacteria is present. In dogs and cats we do not have that luxury. Generally when we know that a dog or cat has been exposed to a tick bite veterinarians will run a test 4 to 6 weeks after the exposure to ensure that the animal was not exposed to Borrelia. If this test is negative, we have no worries. If it is positive we will watch the animal for any signs of illness and treat them if required.

Please contact your veterinarian should you have any further questions about ticks and Lyme Disease. There are also a number of other tick-borne diseases in North America, but they are exceedingly rare anywhere outside of their normal geographical ranges.