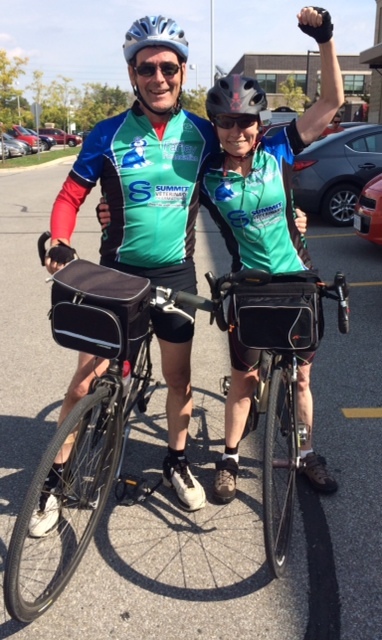 Team Hillcrest rides “to the Alps on tricycles”

The fates may have conspired against us, but Team Hillcrest finished our 50 km Ride for Farley in great spirits with nearly $2000 in the bank for a great cause.

My husband Tim and I must have looked pretty worried leaving the start of the September 20th charity bike event, heading into 45 km headwinds. We had already made the mistake of driving along the route that morning. Normally, we cycle the flat terrain of Prince Edward County, whereas the Farley Ride was in Milton, just as lovely, but with a decidedly “hilly” flavour. With my ankle taped after an injury and my physiotherapist’s cheery, but tentative “give it a try” ringing in my ears, we might as well have been heading into the Alps on tricycles. If I only looked “worried”, I was being optimistic.

Tackling the first half of the out-and-back course was, in fact, pretty grim. One after one, riders gave in to the biggest hill and walked the final 30 metres to the “summit”. At the turn-around point, we were feeling pretty battered.

Did I mention the winds? Well whadyaknow? Those cursed gales that sandblasted us on the way out got behind us to provide a great ride back. It even seemed they were helping flatten out the hills. They also, unfortunately, flattened the giant inflatable finish-line marker, so we had to settle for some big high fives from organizers when we whistled into Farley headquarters at the end. 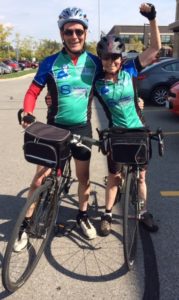 Although the tally has yet to be announced for this year, the 2013 Ride for Farley raised $106,000, all of which went to help sick animals. Tim and I collected about $1,960 and there were more than 50 participants this time, some of whom rode as much as 160 km at the event.

Every year, practices across Ontario including Hillcrest, apply to Farley to provide help for patients whose owners cannot afford their care. The clinics do their part to lower costs and Farley helps to cover those to a limit of $1500 per hospital annually. At Hillcrest, we have helped many sick cats and dogs needing medical care, dentistry or surgery through the Farley Foundation. Assistance is restricted to several specific groups such as seniors with limited funds and the disabled. For information about the Farley fund, operated by the Ontario Veterinary Medical Association (OVMA), visit their website Farley Foundation.

October is Fundraise for Farley Month in Ontario and Hillcrest’s campaign is well underway. Please stop in to see how you can help. If you already donated by supporting us in the ride, thank you for your generosity.

Now that the hilly memories are receding a bit, my husband is making noises about riding for Farley again next year. Personally, I’m thinking of ways to move our ride to the County – it’s more like Holland than the Alps.