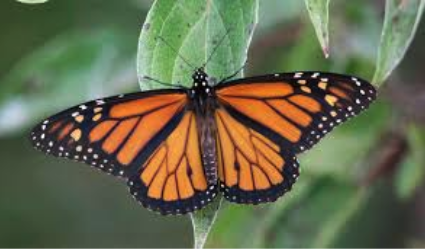 After long days at work, to help clear my mind and do something fun, I like to go for a nice evening rides on my horse after work. After a particularly tough couple of weeks at work, I made it out to the barn for a nice ride. The weather was perfect, the humidity had finally broken, and there was a lovely breeze. As we were walking, we followed the tree line and watched as monarch butterflies flitted in and out of the trees. It’s not very often that I see monarchs, so it was a nice sight to see. We crossed through the tree line to a new field and continued walking. On the other side, we came across many, many more monarchs. They flew in and around us, sometimes around my horses’ ears and over his head. There were groups of four or five that would fly around, and it looked as if they were playing. Sometimes, one or two would fly off of a leaf and flutter alongside us for 20 steps or so before they flew away. It was so peaceful and such a relaxing sight.

I’m not sure what prompted me to look it up, but I had a feeling that I should Google ‘monarchs.’ Specifically, the symbolism behind monarch butterflies. So, as we walked among the monarchs, I did a quick google search; this is the first thing I read.

“Christian tradition views the butterfly as a symbol of resurrection. Symbolically, butterflies are creatures with the ability to transcend the ordinary and take flight into the heavens. In many spiritual circles, the butterfly represents the spirit or soul.”

As I watched the circling butterflies, I thought of the patients I had most recently cared for and ultimately helped with their crossing over the Rainbow Bridge. There are many different meanings behind butterflies depending on what culture you look at, but to me at that moment, seeing them as a symbol of resurrection was exactly what I needed. Names of pets floated through my head just like the butterflies that floated through the air in front of me. I thought of each pet and sent a quick wish off to their families, hoping that they were well.

By the end of my ride, my mind felt a little clearer, and even though it was emotional to think about my patients again, my mind felt quieter. Some people may not be religious or think that there are no such things as signs and symbols, which is fine. But for some, seeing a small symbol like a monarch in a trying time can help. So trust your sixth sense and don’t be afraid to look into things a little more deeply. Strange, mysterious things happen every day, sometimes we have to pay a little more attention to see them. So the next time you are out and see a monarch butterfly, it may be someone stopping by to say hello.