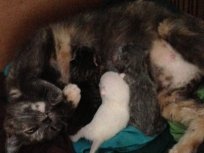 Once again Mother Nature has collaborated with feline nature to bring a cat back from the brink of death. As esteemed Canadian writer Pierre Berton said, “Cats are the ultimate survivors.”

“Apollo”, a mother cat who had trouble birthing a litter of kittens was brought to us in shock last week. Four large kittens had been expelled forwards into her belly instead of out the usual channel and the toxins resulting after 24 hours should have taken all of the mother’s nine lives in one blow. When things first went wrong, feeling unwell, Apollo had gone into hiding. It was almost too late when her owner, Monica Sim, managed to track her down – but only “almost” because she is a cat.

There are legions of stories about the resilience of cats, about their refusal to die or otherwise follow the standard rules of medicine when they are sick. I’d like to think our intervention with surgery and antibiotics, along with the unwavering commitment of her owner saved Apollo last week. No doubt we played a part in the happy ending, but a dog or human in the same circumstances would likely have died.

In one of my favourite books, “Cats I Have Known and Loved,” Pierre Berton tells the heartwarming story of Pousse-Pousse, a neighbour’s kitty who was apparently carried off by a great horned owl. Cat-lover Berton spins a great tale of mystery, piecing together clues to how Pousse-Pousse survived being carried across the Humber river, then dropped from high enough to break a leg. The cat managed to live through more than six months in the wild by huddling with deer and hunting for dinner, finally making his way home when the Humber froze.

I’m sorry to have spoiled the ending of this great short story for you, but it makes the point about feline fortitude so well. Over the years, I have met several Pousses with fractured legs that have healed on their own. I wish I could spin a tale or even solve a mystery like Berton. There are lots of other great stories about fascinating and fussy felines in his book if you are interested.
About 10 years ago, I was assigned to spay an apparently normal, healthy cat – a routine surgery. I will never forget the astonishment of everyone in the operating room when I found the bones of a kitten, free in her abdomen. She had suffered the same accident of birthing as our recent patient, but somehow managed to survive on her own. It was a truly humbling incident.

At this writing, Apollo has been happily reunited with her three surviving kittens – born before things went so wrong – who will be dependent on her for the next six weeks or so. After that, she will doubtless trot away unconcerned and they’ll be on their own to do what cats do so well – as Berton puts it – look after number one and use up nine lives very sparingly.