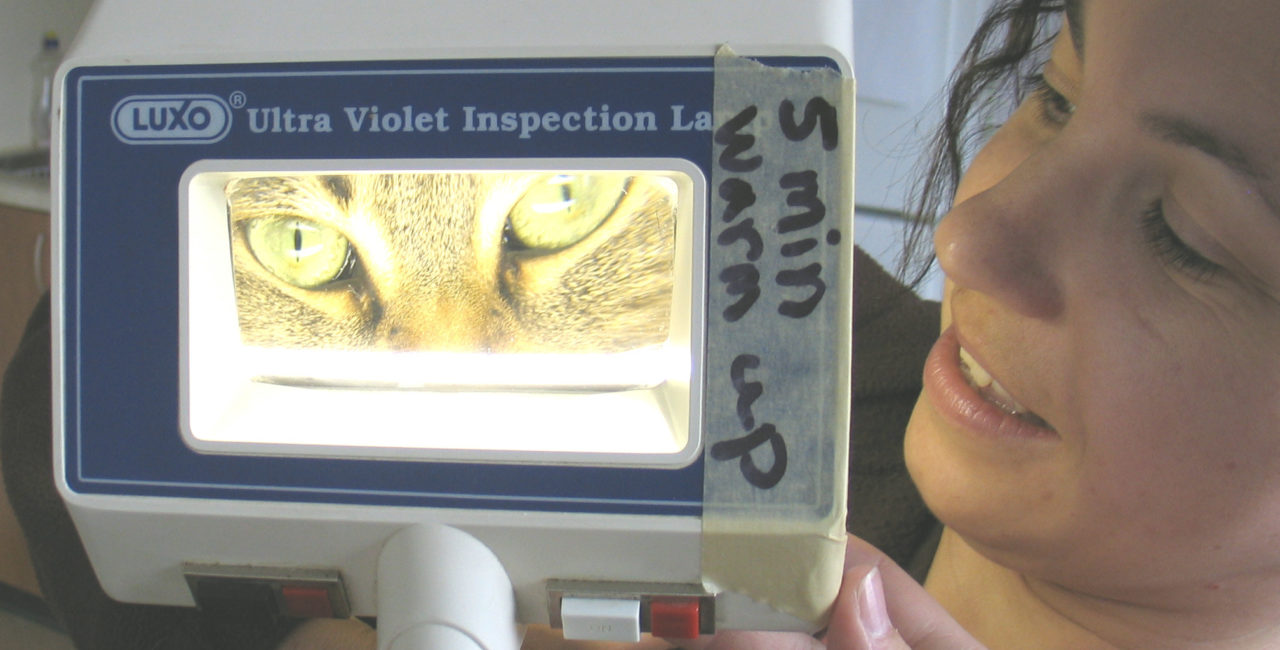 A friend of mine is absolutely paranoid about getting ringworm, or more correctly, about her cats getting the disease. Her concern is understandable, since it’s a highly contagious skin condition and she knows several people who have had it in their homes recently.

Badly misnamed, ringworm isn’t a “worm” at all, but rather a fungus. In various forms, it affects many species including humans, however it is most often seen in cats.

My friend’s worst experience with ringworm involved infection at a cattery where she spent a lot of time helping out. The breeder had purchased a new kitten and imported a severe case of ringworm along with it. She spent thousands on medications and cleaners, at the same time losing revenue because she refused to sell any kittens until her vet gave the all-clear. In the process, my girlfriend all but burned her clothes in her determination not to bring the disease home to her own kitties. If there was a dependable fungus detecting device, she would own at least one.

As funny as her antics have been – tossing suspect clothes and suitcases into dumpsters, meeting her breeder friend in parking lots and driveways to exchange supplies for the kittens – in the end, it was probably all worthwhile to avoid the infection.

There was a huge outcry last summer when a humane society shelter in Newmarket announced it would euthanize hundreds of animals due to an outbreak of ringworm. Fortunately, many of the pets were saved, but only after public protests and media coverage brought the situation to light. An inquiry headed by several veterinary experts resulted in a list of recommendations to help ensure a more appropriate response to future infectious disease outbreaks. But the problems arose to begin with because ringworm is so incredibly difficult to beat.

And the disease was back in the spotlight this month when a Kitchener family brought it home with an infected guinea pig (KWRecord). The new pet was found to have a scaly, hairless patch on its skin, but not before the family’s three children had spent hours cuddling him. Both the animal and one child were diagnosed with ringworm fairly quickly, but it will likely take months before the house is free of the fungus.

Guinea pig, cat, or dog – the species doesn’t much matter – if you are bringing home a new pet, keep it carefully isolated for at least a week and get it checked over by a veterinarian before expo

sing other animals to it. Be sure children wash their hands carefully after handling pets. Ringworm is not the worst thing they could get, but it makes some people want to burn their clothes…

Here are a few links to check out:

The accompanying photo is of a Wood’s lamp, an ultraviolet lamp we use to detect certain species of ringworm which fluoresce when they are exposed to UV light. As you can see these lamps also magnify quite nicely! And, yes… that is Clinck. (ed.)