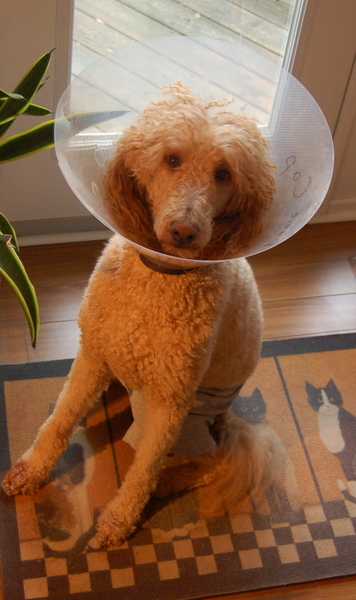 Being the veterinarian’s dog ain’t easy…

Stating the obvious, the invention of plastics was revolutionary for mankind. What I didn’t realize until now is the impact it has had on dogs. A simple sheet of plastic can immobilize a large dog if you roll it into a cone shape.

This has been one of those weeks when I gain a lot of empathy for the people-side of my business – for the owners whose pets we treat, whom we blithely send home with lists of instructions on how to care for their sick dogs and cats. Just give him this pill three times a day. Make sure he keeps that bandage dry. Here, have an Elizabethan Collar to keep her away from those stitches. Oh sure, she’ll be able to eat, drink and do all the normal stuff once she gets used to it.

Our big poodle Cliff has now been sitting frozen in space for nearly half an hour since the E-Collar went on, its big plastic halo zapping his ability to stand or move from the hallway mat. Fortunately, it seems to have spared his respiratory muscles as he appears to still be breathing.

It turns out that Cliff is one of those dogs that just has to worry at his wounds. Last week I removed a cystic growth from his hip and all the fun started. Trying to help nearly 70 pounds of wobbly post-op poodle into the truck, I sent out silent apologies to every client who has struggled likewise there in our clinic parking lot. The intent to buy a ramp for the truck zoomed up the priority list.

At home finally, with no legs broken enroute, we were greeted by my concerned husband with, “Wow that’s a big incision.” I realized again how worrisome even superficial wounds can be to pet owners. But time would pass; the wound would heal. Well, it might heal if Cliff would leave the darned thing alone.

Thanks to my stupidity and Cliff’s obsessive personality, in just a few days my lovely surgical closure was a red, weeping, chewed-on mess. We berate clients who refuse to leave collars on their dogs and I was one of those – bad vet, bad Fiona, go sit in the corner. I had resorted to cutting a tail-hole in some old running shorts and fitting them on Cliff, trying to save us all from the trials of a cone-encumbered dog, but to no avail. He somehow chewed out two sutures.

So now he sits in the hall staring at the ceiling, his freshly laundered shorts an additional embarrassment as the tyrannical plastic hat sucks the strength from his muscles and mind. At least he’s not like some dogs who tear around frantically bashing everything and everyone with their new headgear. 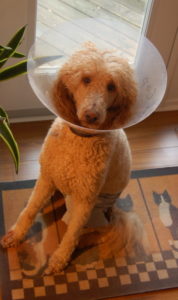 Don’t worry, Cliff’s getting lots of love, sympathy and help getting to the food bowl.

It’s nice that he’s good at taking pills since the wound is now infected just to complete my lessons in responsible pet ownership. I’m going to be sure he gets every dose of antibiotics on schedule.