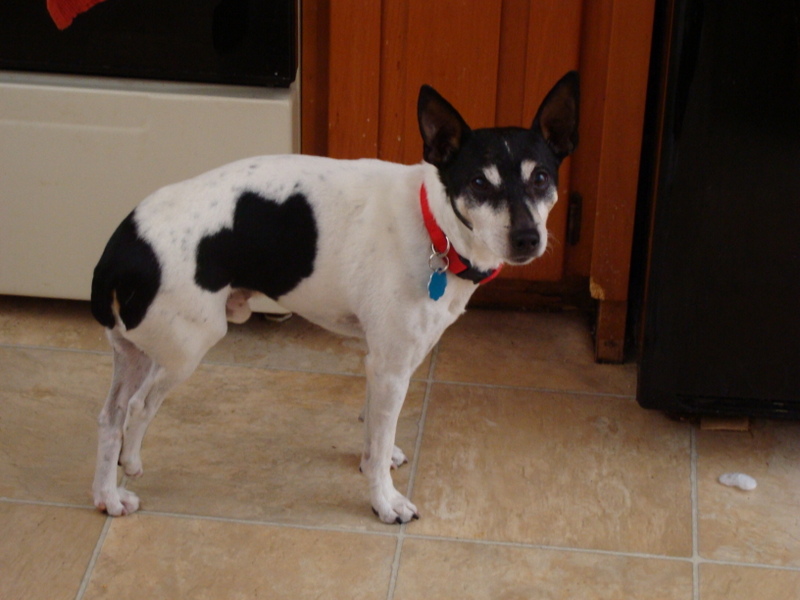 This is Reagan’s story. It is very sad, but all too typical of many dogs rescued by the many wonderful animal rescue groups that are all over North America. Reagan was owned by an older gentleman whose health was declining. When his health became poor enough that he could not care for himself his family had him moved into a senior home and quickly moved into his house. At this point the story goes that Reagan was “moved” into the garage and spent the next two years living alone in there.

The truth of the story is that Reagan was seized by animal control and came to the rescue group Rat Terrier Rescue with his right hip completely shattered from a very hard blow. Most likely he was “moved” into the garage by someone kicking him so hard that it shattered his hip. He then spent the next two years alone in the garage and in constant pain as his shattered hip “healed”, twisted and pulled up next to his body. The website story is a bit different of course, but they need to be “politically correct”, I don’t.

After Reagan was seized he eventually made it to our house where his pain became very evident. He was absolutely terrified of me and would run away from me as hard as he could every time I approached him. One time when I picked him up he turned and bit my finger so hard I lost the nail. That was sort of the last straw as it were. The veterinarian he had seen in the U.S. before he made his trip up had mis-diagnosed his hip as a simple arthritic condition but it was obviously much worse than that. We anaesthetized Reagan and x-rayed his pelvis and found out what had been done to him. My wife started a fund-raising movement to help raise money to pay for his surgery and managed to raise over $1200 to help pay for Reagan’s surgery and other minor health issues. You can read some part of his story on the Rat Terrier Rescue website, click on the link and look on the right hand side of the page… there is his picture!

The next day after his leg was amputated Reagan’s temperament switched 180 degrees. 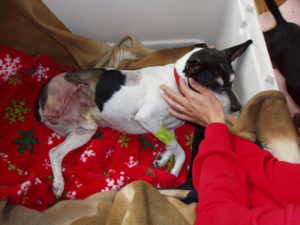 He turned into a simple crotchety old bugger that someone could actually love. He growls like a demon when you pick him up to put him in his kennel for any reason (obviously a permanent mental scar from how he was treated), but never really means it and never attempts to bite. It is just his way of telling you that he is upset. He is terrified of thunderstorms (so we use a Thundershirt on him which works wonderfully!) and spends as much time as he possibly can sleeping on his blankie on the couch and stealing chew-toys from the rest of the dogs (he is a bit of a hoarder). That is when he is not curled up on our bed between our pillows sleeping at night.

As you have probably already figured out… Reagan now lives with us as what my wife calls our “permanent foster”. It is very unlikely that anyone wants a crotchety ancient old Rat Terrier with only three legs who has occasional seizures, so he will be here for the rest of his life I imagine. However that is just fine because I love the crotchety old bugger, I think of him as a role-model for what I want to be like when I get his age! Don’t tell my wife either of those last two points please…