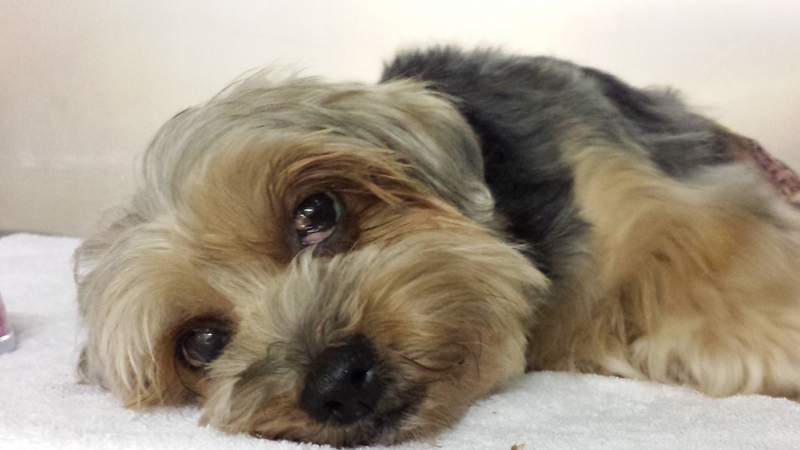 This is “Skylar“, and she is an amazingly sweet little girl when you consider where she came from. She is a Yorkshire terrier that was seized in the huge puppy mill bust in Quebec last fall that my wife attended for Red Rover. She has been in her foster home in the Ottawa area for the past couple of months. Ever since she was seized she has had a problem with her left hind leg.

The veterinarian in Ottawa assessed the leg and determined that she had some severe degenerative joint disease (arthritis) present and that she had an issue with her kneecap popping out of place. His estimate for diagnosis and treatment of the knee was beyond what the rescue group could afford so they called my wife Sonyia to see what we could do at Hillcrest Animal Hospital.

I told them that regrettably I would have to see her before I could give them any form of estimate on repair of the knee. Her foster parents drove her all the way down from Ottawa on Wednesday (yes, that Wednesday – the nasty weather Wednesday)… it took them over 6 hours to get here. They are wonderful people, obviously. We x-rayed her hips and knees and determined that she had severe damage to the outside of the knee joint and a medially-luxating patella (kneecap pops out of place). This was likely caused by getting her leg caught in kennel bars, badly damaged and never treated.

We provided an idea of cost to the rescue group (we often do discounted surgeries for rescue groups) and luckily they gave us the “go-ahead”. Even more luckily for “Skylar” the changes on the x-rays were more severe than the reality of the joint. Once I got in there I discovered that all I really had to do was clean some arthritis up and repair the groove that the kneecap rides in. “Skylar” should heal very quickly from this surgery and her discomfort post-op should be minimal. I expect her to be walking on this knee within a week, 2 at the most.

Rescue groups are great organizations run by caring people. However their real strength lies in the dedication of the volunteers that foster their dogs (and cats) and give them the social skills that will allow them to be placed into “Forever Homes”. I want to extend a very sincere thank you to Debbie and Alain for making that horrendous drive and for giving us the chance to meet the wonderful little “Skylar”. She is ridiculously sweet for a little girl that came from such a horrendous place.