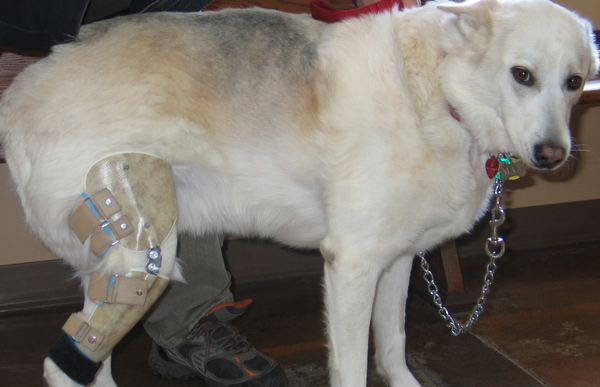 You don’t have to be a football quarterback to be at risk for knee injuries. In fact, anterior cruciate ligament tears in the knee are the most common cause of lameness in dogs. Pet owners in North America spend more than $1 billion every year to treat these injuries.

The anatomy is a bit different between linebacker and Labrador and the terminology varies somewhat – knees are called stifles in dogs – but when the stabilizing ligaments are torn, everybody gets sidelined for the season.

It’s pretty easy to spot a dog with a torn cruciate ligament (CL). They are usually large-breed, active dogs, often overweight and they hobble into the clinic using their hip flexor muscles to hold the injured leg high off the ground. Points for the dogs – they have a much easier time than we do, with three legs on which to hobble. A test to confirm CL rupture often needs to be done under sedation.

There’s a lot of debate about what might predispose a particular animal to tearing a CL and even more dispute about the best way to fix them. Without surgical stabilization, longer periods of discomfort and increased joint damage leading to arthritis are likely.

The majority of vets repair CL tears using thick suture around the joint capsule. Some specialists promote a more invasive technique of realigning the bones in the leg using metal plates, but there is no scientific evidence that this is a better way to go for the average dog. In most cases, the price tag for the simplest procedure will start at just under $2000.

Less frequent sufferers of CL damage, small dogs and cats, usually do fine with three to four months of rest and anti-inflammatories, although there may be special cases requiring surgical repair.
Physiotherapy and supportive braces are common tools in treating human CL ruptures. Until recently, these extras weren’t promoted or even available for dogs. They are now slowly gaining acceptance with vets, but it can be a challenge to get the dogs on board. People don’t tend to bite at supportive braces or run away when it’s time to put ice on the injury. Still, dogs can be trained with kindness and small treats to accept most procedures if they aren’t overly painful.

There are now some great resources for canine physiotherapy in Quinte, Toronto and elsewhere. One of my patients, Max Nutis, recently got a custom brace to support his injured stifle through post-surgical recovery. Proper braces can cost close to $1000.

So that’s the skinny on diagnosis and treatment of CL ruptures. Is there anything that can be done to prevent this debilitating injury? Not really, other than weight control, regular exercise and avoiding fast-paced games when the footing is poor. Since dogs don’t often get tackled, most canine CL tears occur when running, jumping and turning; sometimes a foot gets caught somehow, contributing to the injury.

Human athletes work hard to strengthen muscles supporting their knees and learn to avoid movements that can injure cruciates, such as sudden decelerations. Likewise, dogs competing in agility trials are now being trained on wobble boards to improve co-ordination and strengthen the muscles of balance, but somehow, I don’t see this becoming mainstream for injury prevention.