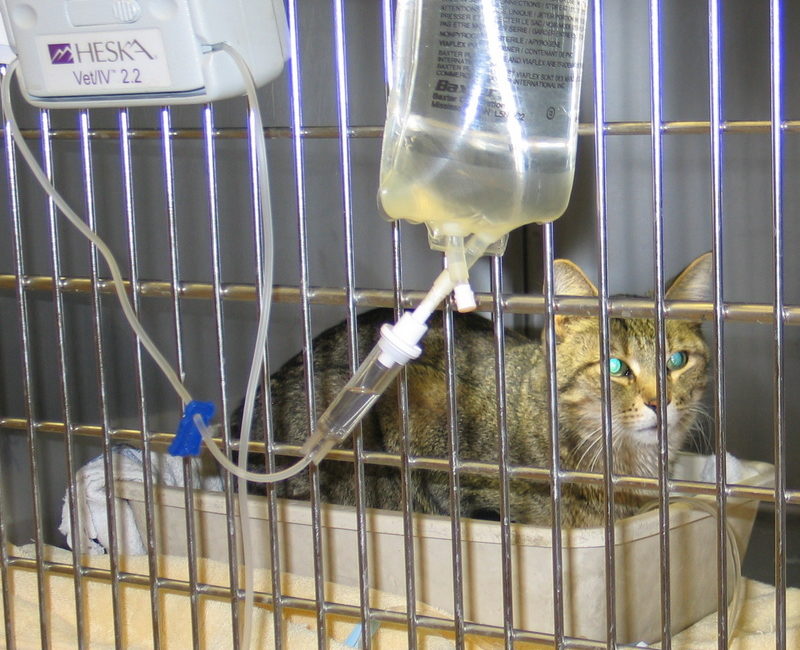 One more kitty’s wandering days are over

Benny Fielding lost one of his nine lives and the key to the front door after getting into a toxin last week. In tears over seeing her good friend so sick, his owner is determined Benny’s roaming days are over.

“I don’t know what I’d do without him,” said Brenda Fielding the day before Benny was released from hospital. “I’m going to do everything I can to keep him inside.” 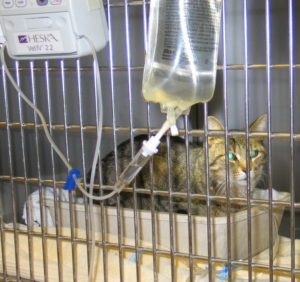 As a young adult cat, Benny has been used to doing the rounds of his neighbourhood, enjoying the freedom of being outdoors and wandering at will during the day. Always home to stay at sundown, he was otherwise in and out, in and out, in and out as he wished. Those of you unfamiliar with owning an indoor/outdoor kitty, should have a listen to humorist Garrison Keillor’s “The In and Out Cat Song”.

Humorist aside, the debate over allowing cats to roam has been escalating for years. Not so long ago it was considered cruel to keep cats confined, but the pendulum has swung a long way in twenty years.

Benny’s story illustrates one major reason for the change in attitude. “Outdoors” is just not a safe place for kitties. When he came in to our hospital, dehydrated, painful and unwilling to eat or drink, Benny had no specific signs to tell us what was wrong. It was only through the process of elimination that poisoning was suspected. We’ll never know what toxin was involved.

And there are lots of Benny stories – our own clinic cat will wear diapers for the rest of his life after being hit by a car during a stroll. In Brighton, there are neighbourhoods where many cats have disappeared over the years, likely carried off by fishers, a ferocious relative of the weasel.

Admittedly, I have been hesitant about the indoor-only trend, seeing how much fitter my feline patients are when allowed to roam. They are usually lean, have healthy teeth from hunting and rarely develop stress-related problems such as house-soiling. But over time, I’ve seen too many of these healthy cats die young. The average life expectancy for a roaming cat is five years, compared to 15 for indoor kitties.

After seeing Brenda Fielding’s heart breaking when she thought her Benny might not make it home from hospital, I’m finally sold – cats belong indoors unless you leash train them or provide a safe enclosure.

There are also environmental benefits to keeping cats inside where they cannot kill songbirds. A 2013 study by the Smithsonian Conservation Biology Institute reported pet cats kill as many as 1.5 billion birds every year in the United States alone.

Keeping kitty indoors is much easier if she is not allowed out from the start and it can be a real challenge when young children are running in and out, in and out, in and out. It’s important to provide a stimulating environment inside the house to keep your cat active, lean and happy. Dental care also becomes more important since animals that don’t eat prey often have tartar problems. 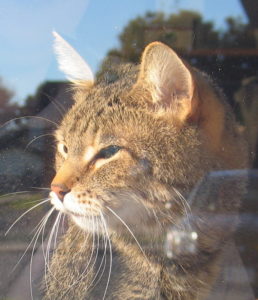 For help keeping cats happily indoors, talk to your veterinary team for suggestions. Cornell University has an excellent website called the Indoor Cat Initiative. It generally only takes a few weeks to get cats used to staying inside, but sometimes it’s a struggle. We needed an Invisible Fence product for our clinic cat. Do not use electric collars without proper training.