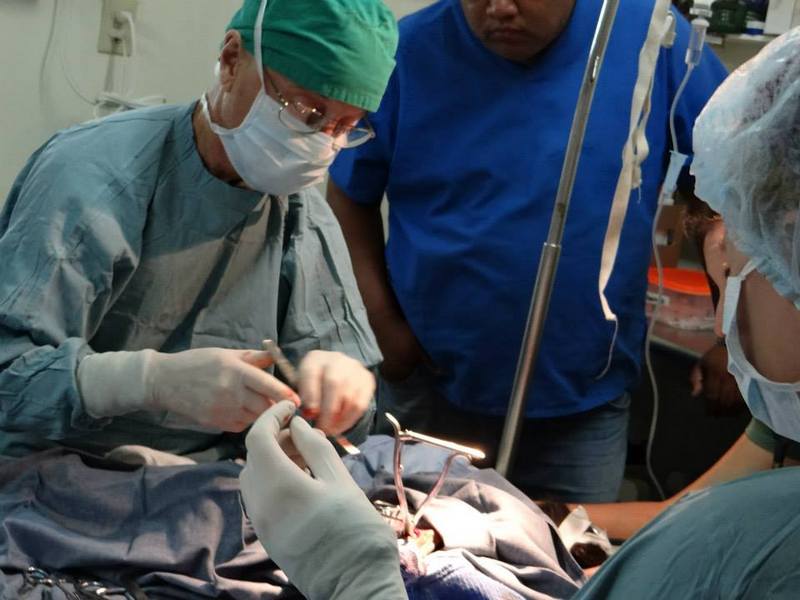 Local vet gets up to serious monkey business!

A whole host of Quinte area pets now have something in common with two wild monkeys in Belize. They owe their mobility to local veterinary surgeon Gilbert Brodeur.

The semi-retired vet has been fixing broken dogs and cats across our region since 1997, but until recently, his skills in bone surgery had been used mostly on pets. Last month, he heard about the plight of two injured Yucatan black howler monkeys with arms too damaged to allow their release back into the wild. Their injuries were so complicated neither veterinarians nor human doctors would tackle them.

Dr. Brodeur is a familiar figure in local vet clinics not equipped to perform complex orthopaedic procedures. When animals are born with bone defects or injured in accidents, we often call on “Dr. B”. Throughout my career, he has been a valuable mentor, giving me confidence to tackle a common spectre in veterinary surgery – the unexpected. And, although he didn’t know what to expect, true to form, he volunteered his time to Belize Wildlife and Referral Clinic (BWRC) to help Spartacus and Livvy.

“After looking at the x-rays, I contacted them to give some advice and offered to do the surgery for free if they sent the monkeys here,“ he explains. “But they said, ‘We can’t send the monkeys to the vet, but we can bring the vet to the monkeys’.”

Both animals are wards of Wildtracks Primate and Manatee Rehabilitation Centre, a non-profit conservation facility in Belize. Two-year-old Livvy had been rescued from poachers intent on selling her as a pet. Young Spartacus was found injured in the jungle. Donations funded Dr. Brodeur’s trip to BWRC where an international team was assembled, including volunteer vets from Switzerland and Washington. 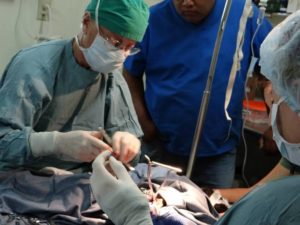 Unlike Dr. B’s usual patients, monkeys have arms much like our own. They must be able to bend or twist their joints to perform complex tasks such as food grasping and tree-climbing. Livvy’s arm was fused at the elbow, partially bent, useless. Spartacus had a fused and crooked wrist.

After surveying the literature – mostly human – and consulting with peers, Dr. Brodeur developed a plan to treat both animals. The results so far are encouraging. Both monkeys are using their hands when eating and hopes are high they will recover enough function to return eventually to their jungle home. 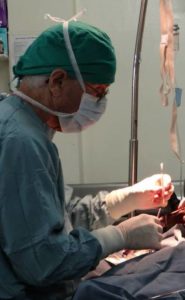 “It’s really different than dealing with dogs and cats, the way monkeys respond and interact with people,” says Dr. Brodeur. “The day after the surgery, whenever she saw me, Livvy would hold up her arm and cry. It brought tears to my eyes.” 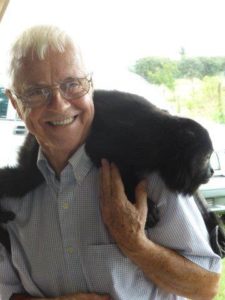 Videos have been made of the surgery and the two monkeys a few weeks later. Facebook pages are filling with thanks to Dr. B. along with testaments to his skill and kindness. While in Belize, he also fixed a dog’s broken spine and the little pooch, once paralysed, can now stand.

I will not now be surprised to find him happily reviewing x-rays of injured tigers or giraffes, preparing to head off again to meet the unexpected.

“What else can I do for excitement?” asks Dr. Brodeur who celebrates his 78th birthday next month.